A seminal figure among the Abstract Expressionists, Robert Motherwell (1915-1991) was also a writer and philosopher of abstract painting in post-war America. His paintings and theoretical approach forever shaped the formal discourse of his era.   Motherwell’s earliest exhibits occurred while still a graduate student in art history at Columbia University. He left a scholarly path to pursue painting full time in 1941. Motherwell’s prominence on the New York scene coincided with the fabled convergence of a new momentum in American-led abstraction - presented by forward-thinking curators at MoMA and The Whitney Museum of Art, and such galleries as Art of This Century, Samuel Kootz and Sidney Janis. All exhibited Motherwell’s paintings during this time. 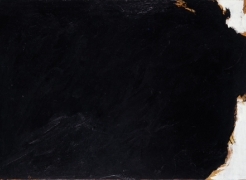