An exhibition of sculpture and collage by Louise Nevelson will be on view at Locks Gallery from December 5 through 30, 2008. There will be an opening reception on Friday, December 5, 2008 from 5:30 to 7:30pm. Gallery admission is free and open to the public.

This exhibition features a survey of collages from the 1970s, in which she utilizes materials such as metallic paper, newsprint, cardboard, paint and wood. These works represent Nevelson’s accomplishments in creating intimate and complex compositions.

Writing about the collages, art historian Judith Stein notes: “Flatter and more minimal than her more densely-worked walls, the collages were never painted in one unifying color, an option that would have erased the materials’ complexions and evidence of wear. In these intimate works, [she] let the tones of the orginal materials speak for themselves. . . In her collages, Nevelson transformed scavenged scraps into art.”

Louise Nevelson was born in Kiev, Russia in 1899 and emigrated to the U.S. at age five. She studied at The Art Students League of New York, painted with Hans Hoffman in Germany, and worked as an assistant for Diego Rivera. She was featured in the U.S. Pavlillion in 1962 and 1976. The subject of retrospectives at the Whitney Museum of American Art, NY, in 1967 and 1998, she also had an international traveling restrospective in 1973. Louise Nevelson died in 1988. 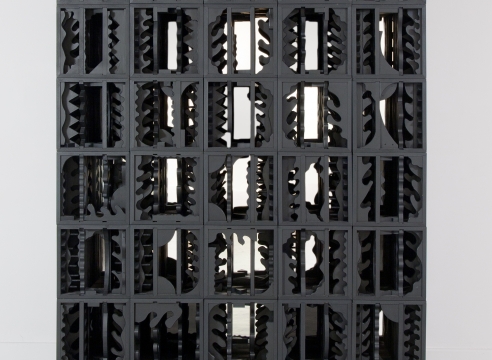