"If the leafy, stem-like forms in her paintings were a degree or two less definite, we would call Swansea an abstractionist. If these forms were a touch more referential, she would count without question as a realist. Threading her way between these possibilities, she keeps them both alive. In the matter of pictorial structure, too, she gives us a choice. We can, if we like, read her paintings as compositions of a traditioal kind: patterns of thrust and counter-thrust that come to rest, ultimately, within the edges of the canvases. But if Swansea's images are thus contained, it is just barely. The major precedent for composition attenuated to the point of dissolution is Claude Monet's series of mural-sized Water Lilies. Swansea obviously knows those paintings well. Moreover, she understands what Jackson Pollokc was up to when, with his dripped and poured images, he broke through the boundaries of traditional composition. Placing Swansea in the Pollock tradition, we can read her paintings as allover images: fields where pictorial incident is so localized that no overarching compositional structure appears. Nothing ties the image to the edges, and energy flows, by implication, into the boundless realm beyond the canvas." - Carter Ratcliff, The Reality of Shadows 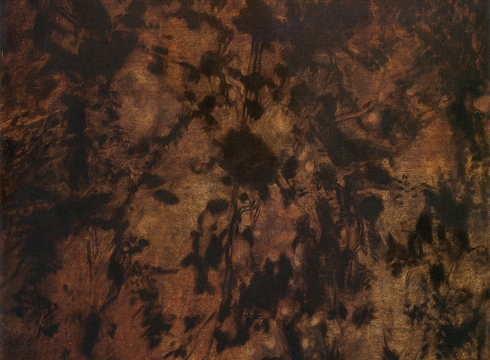