January 11, 2006, Philadelphia, PA—Warren Rohrer (1927-1995), revered abstract painter, completed relatively few single-titled, series during his 40-year career. Perhaps his largest and most transforming is the group of paintings, completed between 1975 and 1976 all titled Pond paintings. For the first time, all the works from this series - 14 pieces - will be shown together at Locks Gallery, February 3 –28, 2006. The opening reception will be held Friday, March 3rd from 5:30–7:30 pm. Admission is free and open to the public.

Beginning in the early 70s, Rohrer’s work shifted from landscape and still-lifes to abstractions based on a square format. The influence of Agnes Martin’s grid paintings of the 60s and 70s were influential, but Rohrer had long been drawn to the simplicity and spare aesthetic of grid-lined abstractions. This minimal approach reinforced and affirmed the artist’s own connection to the geometric symmetries of farm fields (Rohrer hailed from a long line of Lancaster farmers) and he increasingly referenced these associations in his work.

All the works in the Pond series are square format—at the heart of the exhibit are seven paintings, each 60 x 60 inches, composed of shifting color fields with ruled lines hovering over the surface. In addition, smaller Pond studies which Rohrer created on canvas and paper will be shown.

At the time the Pond paintings were completed, Rohrer lived on a farm in rural Lancaster County, Pennsylvania where he painted in the fields or by a small pond on the property. The artist began teaching at Philadelphia College of Art full time in 1971, and until his death was a prominent figure in the teaching community. 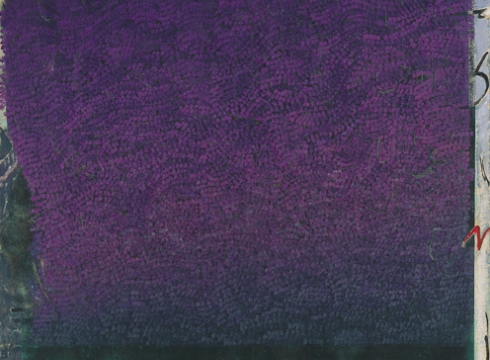