"Excitement is to be found in the suggested, in what the minimum of articulation can lead us to see. It is one thing to enhance the obvious; it is quite another to catch the elusive. We pluck a few threads from reality and weave them into another reality, perhaps producing a package of wonder, formed of light and silver, with poetic and mystical charms."
—Ray K. Metzker, 1977

Locks Gallery is pleased to present an exhibition of classic and recent photographs by Ray K. Metzker, shot primarily in Philadelphia. The exhibition will be on view October 14 through November 12, 2011. There will be an opening reception for the artist on Friday, October 14th from 5:30 to 7:30 pm.

In Ray K. Metzker's most recent series, the bodies of cars reflect and distort urban views of Philadelphia; the convex metal and glass surfaces structure the photographic compositions. The lines are precise, the perspectives are biased or turned upside-down, and the eye gets lost. The reflections interplay with the lens of the camera and convey a crystalline quality to the blacks, the grays, and the whites. As an iconic reminder, the exhibition will feature selected vintage prints from the series Philadelphia (1962-1964), whose subjects and compositions are surprising forerunners of the artist's latest series.

Photographs from the Double Frame series (1964-1966) and the Chicago "stairs" composition from 1959 (vintage) will illustrate Metzker's practice of "collage" compositions, this time in the dark room, where he used two to twenty five negatives for each print. Additional acclaimed photographs from the '60s and '80s will complement the presentation.

Ray K. Metzker completed his graduate studies in 1959 at the Illinois Institute of Technology in Chicago where he studied with Harry Callahan and Aaron Siskind. His earliest photographs from this time demonstrate the artist's abiding interest in technical experimentation and formal invention, traits indicative of the Bauhaus tradition to which Metzker belongs. In 1962, the artist moved to Philadelphia, where he lives and works today, and immediately began photographing his new urban environment. 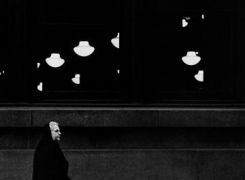 "Salute in Black and White" by Stephan Salisbury