April 24, 2006, Philadelphia, PA—Locks Gallery is pleased to present a large-scale exhibition of new and recent paintings by Pat Steir from May 5 through June 17, 2006. Admission is free and open to the public.

Comprising a dozen works from 1999-2006, the paintings show the progression from her landmark waterfall series to a new body of work centered on the night sky and moonlight. From the micro view of waterfalls, fully realized with the textural imprint of paint, Steir’s subjects have recently expanded, metaphorically, to include infinite space. As described by Ida Panicelli in Steir’s 2003 Gallerie Nationale Moderne Borghese exhibition catalogue, “it is in light that Steir’s work finds its expansion. From the almost physical presence of the waterfalls, now the paint disintegrates into atmospheric dust, into impalpable luminous presences, in an atomization of vision . . . the loss of the image’s physicality is replaced by the paint’s elusiveness, which recalls the last paintings of Mark Rothko for the ecumenical chapel in Houston.”

The title of this, the artist’s second exhibition at Locks Gallery, refers to the optical illusion that painting employs to convey cosmic space.

The artist has exhibited internationally since the 1970s and has participated in every major contemporary art forum, including Documenta, the Venice Biennale, the Whitney Biennial and the Sao Paolo Bienal.

Pat Steir is the recipient of a Guggenheim Artist  's Fellowship (1981), a National Endowment for the Arts Individual Artist  's Grant (1973), and an Honorary Doctorate of Fine Art from the Pratt Institute (1991). She is a founding board member of Printed Matter bookshop, New York City, and the landmark feminist journal, Heresies. Her work is included in major public collections around the world, including: The Metropolitan Museum of Art, NY; The Museum of Modern Art, NY; The National Gallery of Art, Washington, DC; The San Francisco Museum of Fine Arts, CA; The Solomon R. Guggenheim Museum, NY; The Tate Gallery, London; and the Whitney Museum of American Art, NY. Pat Steir lives and works in New York 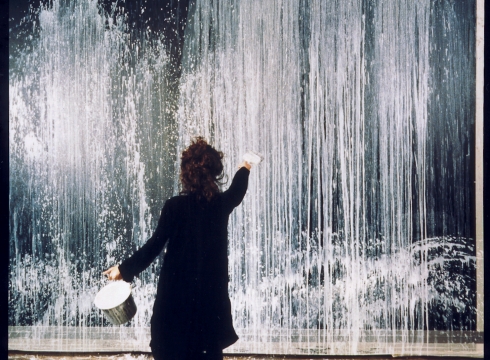 Screening
Screening of Pat Steir: Artist
A Film by Veronica Gonzalez Peña Barnes Foundation, May 13, 2019
Back To Top