Locks Gallery is pleased to present an exhibition of paintings by Canadian artist Louise Belcourt (b. 1961).

There will be a reception for the artist and walk-through discussion with Clint Jukkala, Dean of the School of Fine Arts at the Pennsylvania Accademy of the Fine Arts (PAFA) on Friday, January 20, from 5:30- 7:30pm.

Belcourt’s paintings explore the intersections between the built and natural world. For her first show at Locks, the artist presents new oil paintings of architectural “mounds” in shifting spatial planes—what she calls “paintings of sculptures of landscapes.”

Using bold colors, radiant light, and dynamic perspectives, Belcourt’s images of tectonic landforms—stacked, occluded, and cascading into foreground and background—meld nature and man-made forms, reflecting an ecological awareness and heightened sensitivity to the world around us.

“The impetus for my work comes from the outdoors,” the artist has said. “In paintings I mingle architecture and natural forms—things that are in my daily periphery.”

Throughout her career, Belcourt has explored the liminal spaces of perception. After a long standing twenty-year dedication to the medium, painting remains her tool for approaching the fundamental question of what is her role, both as artist and as human being. She splits her time between a remote, rural town in Quebec, Canada—where she spends four months working out of a converted barn overlooking the St. Lawrence river—and her longtime studio in south Williamsburg, Brooklyn, with its vast views of the East River and Manhattan skyline. Her dual residence has a significant impact on her paintings, which blend impressions of the countryside and crisp Canadian light with city rhythms and the blocky architecture of New York City. Belcourt’s imagery evokes forms from prehistoric “mound-builders” to urbanization, while creating a visual language distinct from a purely representational or abstract syntax. The artist employs a directness, physicality, and visual clarity in her paintings that feels increasingly rare in our media-driven digital age.

Louise Belcourt was born in Montreal, Canada, in 1961 and has resided in New York City since 1984. Recent solo exhibitions include Mounds (2012) and Paintings (2010) at Jeff Bailey Gallery, New York, NY; In the Land (2009) at Les Jardins de Metis, Quebec, Canada; and Water, Land, Mammal (2005) at Patricia Sweetow Gallery, San Francisco, CA, among others. Her first solo shows in New York City were with Annika Sundvik Gallery (1996) and Peter Blum Gallery (1997). Belcourt has received numerous awards and grants including the New York Foundation for the Arts Fellowship (2015), the John Simon Guggenheim Fellowship (2012), and the Pollock-Krasner Foundation Grant (2000). Collections include the Montreal Museum of Fine Arts; the Aspen Contemporary Art Collection; the Progressive Art Collection; Nokia Corporation; Deutsche Bank; the Cultural Ministry of Quebec; and the Fleming Museum at the University of Vermont. She is a 2017 recipient of the Pollock-Krasner Foundation. 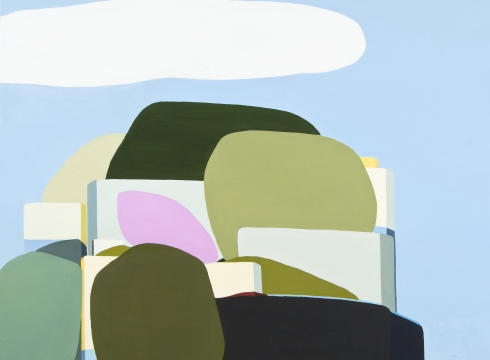