In his second exhibition at Locks Gallery, Jun Kaneko, the internationally-acclaimed artist, will present a series of intimate-scaled, constructions from 1984–2006. This exhibit coincides with the East Coast debut of his production of Madame Butterfly and a city-wide celebration of the artist’s work with sculpture installations at the Philadelphia Museum of Art and Kimmel Center’s Commonwealth Plaza. Madame Butterfly will be performed by the Opera Company of Philadelphia, October 9–18, 2009.

In contrast to the monumental Dangos shown in 2008 at Locks, this exhibit focuses on human scale works that address the space in and around a sculpture, and the formal relationships between elemental shapes like the sphere and plane. The origins of these works date to an experimental period the artist spent while teaching at RISD from 1973–75. Kaneko sought to reverse scale without losing what he describes as “visual energy” and to figure out “how the sculpture resists or goes with gravity, how that gesture affects the enviornment, the air around the form . . .”

Kaneko, born in Nagoya, Japan has pursued a dynamic and varied studio practice in painting, sculpture, ceramic and installation since studying in Los Angeles in the ‘60s and apprenticing with Peter Voulkos. The artist has shown extensively in the U.S. since 1964 and has had exhibits in Finland, Norway, Japan, South Korea and Canada.

Kaneko's work is in over fifty museum collections throughout the world including Arabia Museum, Helsinki, Finland; Detroit Institute of Arts; Los Angeles County Art Museum; Museum of Art and Design, NY; The National Museum of Art, Osaka, Japan; Philadelphia Museum of Art; Phoenix Art Museum and Smithsonian American Art Museum. The world premiere of his design for the opera, Fidelio, was performed in Philadelphia last year. 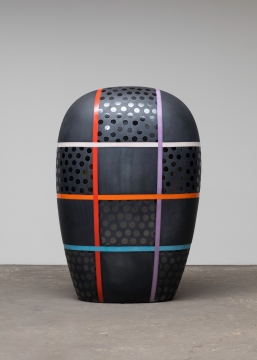