John Moore is a contemporary realist painter whose compositions primarily focus on post-industrial America. His paintings are imbued with the lingering energy of rusting steel, burnished wood, and built-up paint that comprise a familiar contemporary urbanism. In these composite scenes of skylines, city parks, and brick laden interiors, Moore fabricates compositions of physical locations and idealized memories, offering a contemplative renewal of the changing age of industry.

Moore’s illusory imagery was long centered around his studio in North Philadelphia, but in recent years the artist has relocated to Belfast, Maine—a city which, like Philadelphia, bears traces of its once-booming 19th and 20th century industry. The fact that many of Moore’s compositions are now syntheses of Philadelphia and Maine speaks to the post-industrial landscape as a ubiquitous American condition. His interest in the largely overlooked corners of industrial production place him in a conscious dialogue with 20th century precisionist painters such as Charles Demuth and Charles Sheeler, who not only depicted the rise of American industrialism in their crisp images of smokestacks, mills, and harbors, but also crucially expressed the period’s energy of feverish progress and the optimistic rise of modernity. Moore’s paintings provide a counterpoint to this once-great-energy with the austere beauty of their current state, empathetically imparting his own ruminations on the promise of American industry.

With an uncommon attunement to these seemingly withering spaces, Moore reawakens the spectors of this semi-shuttered reality. As such, Moore’s paintings are viscerally believable, an effect that is grounded by his acute ability to observe and record the transforming effects of light. Moore’s affinity for the late afternoon and sunset hours illuminate the urban sprawl with warm light and purple shade, and his utilization of windows or chain-link fences as framing devices creates periscopic compositions that mediate indoor and outdoor space. Moore troubles the impermeability of time in moments where the jewel-toned sky is seen only through the dark frame of a window; or a fence shrouded in plastic serves as the horizon for a pristine, lakeside sunset; reiterating the temporal significance of commonplace clashes between nature and the urban environment.

Locks Gallery is pleased to present this new solo exhibition by the artist, which follows his significant museum survey at the Maine Center for Contemporary Art in Rockland. Born in St. Louis Missouri, Moore received an MFA from Yale University before settling in Philadelphia where he worked for over four decades. His paintings are included in major collections such as the Art Institute of Chicago; the Metropolitan Museum of Art; the Museum of Fine Arts, Boston; the Pennsylvania Academy of Fine Arts; the Philadelphia Museum of Art; Yale University Art Gallery; and many others. Formerly Gutman Professor of Fine Arts at the University of Pennsylvania, he previously taught at Boston University, the Tyler School of Art at Temple University, and the University of California, Berkeley. 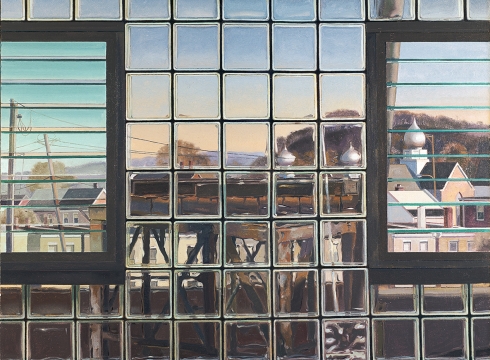