January 12, 2006, Philadelphia, PA— Locks Gallery presents a 35-year survey of one of America's most-noted realists, John Moore, from March 3rd through April 8th, 2006. The opening reception will be held Friday, March 3rd from 5:30–7:30 pm. Admission is free and open to the public.

This exhibit, the artist’s first in Philadelphia since 1994, explores Moore’s intricately composed urban views of Philadelphia, Boston and Paris - constant subjects throughout his career. One of the artist’s most acclaimed works, Night Studio from the Colby College Art Museum collection will be shown in Philadelphia for the first time.

The twenty paintings on view date from 1967 - when Moore was still in graduate school at Yale University, to his most recent paintings completed in 2005. Several of the paintings are from private collections and have not been shown publicly since they were first shown in the 1970s and 80s. The subjects, urban landscapes and interior views, are culled from travels to Israel, Spain and the U.S. and Moore's longstanding working environments in Philadelphia, Boston and Eastern Pennsylvania. The exhibit will include iconic images of Coatesville, Pennsylvania that recall Charles Sheeler's seminal images of the grain elevators of Lancaster and steel mills of Pittsburgh. 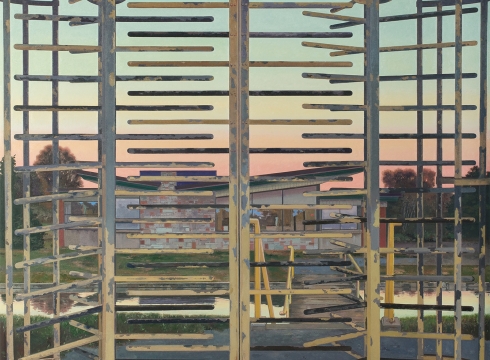