Locks Gallery is pleased to present a solo exhibition of recent paintings and drawings by Joanna Pousette-Dart (American, b. 1947). This will be the artist’s first solo exhibition with the gallery following her inclusion in the 2017 group exhibition Shape Paintings.

Pousette-Dart’s paintings extend the traditional rectangular format of painting through a process which often begins with drawing as a way “into the space” itself. Interested in the relationship between light and form, her shaped configurations of dynamic color and biomorphic contour explore the experience of gravity and motion. Evoking the curvature of earth’s horizon, or the shape of the human eye, each canvas appears as though oscillating in motion, pulsating and creating a spatial continuum beyond the canvas. Her compositions are never fixed or contained within the frame, rather, each line moves through space as an extension of the site it occupies and as a result, we enter a “space of painting.” These objects in space attempt to reveal and extend the limitations of what a painting can be.

Activating a perceptual distortion between the inner formations and outer shapes, Pousette- Dart’s architectonic forms challenge the accuracy of our observation and the activity of perceiving. Her use of color and line highlight the effects and forms of traveling light, and become investigations into “how a picture works in terms of its perception (and) neural effects” as stated by Robert Pincus-Witten in Artforum (2008). In the artists words: “I think of the shape of the painting as a space being edited by my peripheral vision. So, while the painting is meant to be whole within itself, I would like it to feel as though it’s part of a larger whole extending beyond the frame. I’d like the rhythm and the light of the painting to reverberate beyond its edges.”

In these abstractions, Pousette-Dart translates her empirical observations of the landscape, in particular, the open desert plains in Galisteo, New Mexico where she lived in the 1980s, into new poetic symmetries. Her ability to reveal the continuous exchange between light and color is informed by such experiences in the vast expanse of an infinite horizon. Pousette- Dart explains: “The main sensation I felt there was the curvature of the earth, and painting within a rectangle seemed increasingly arbitrary—it seemed to turn the experience into a picture. I was taking 360-degree photographs, which I stuck together with tape to create a continuous flattened landscape. In taking the photographs I could see the light changing the interrelationship of all the elements from frame to frame as I was shooting. I began making drawings with the photos in mind, cutting shapes and putting them together and these drawings ultimately led to the shaped panels.”

Pousette-Dart’s innate understanding of seriality, pattern and structure is grounded by her research and interest in Islamic, Mozarabic art and Chinese Calligraphy. Each line in her works moves us beyond the site itself and inside the earth’s cyclical rotation, resembling, in many ways, a “world without end,” or rather in the artist’s words: a floating world. 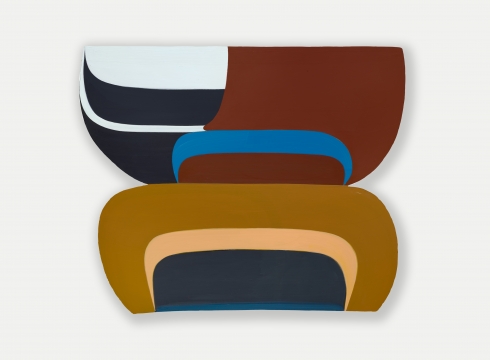