Plexiglas mirrors, photograph of paintings for sale in Cracow, Poland, installed in corner

Museum of Failure: Invisible Self-Portrait in my Studio, 2008
oil on six wood panels
8 x 12 ft
Installation at the Whitney Museum of American Art

October 2008, Philadelphia, PA – Locks Gallery is pleased to present an exhibition of new work by British-born artist Ellen Harvey. Private Collections will be on view November 7 through December 13, 2008. There will be an opening reception Friday, November 7th from 5:30-7:30pm.

Ellen Harvey will exhibit new paintings and installations at Locks Gallery -- the most comprehensive exhibition of her work to date. Private Collections will consist of three new projects as well as the artist’s Museum of Failure, shown in the 2008 Whitney Biennial.

Harvey's art frequently plays with the disjunction between art’s lofty aspirations and its all too prosaic reality. For this exhibition, she brings together four “art collections” in which the personal disrupts any attempt at a larger meaning.

The Room of Sublime Wallpaper is built in the center of the gallery as a separate interior space. From the doorway of the installation, the viewer is lured in by the luxurious, escapist landscape paintings hanging inside. It is only upon entering the room that it becomes apparent that the paintings are angled mirrors reflecting the hidden painted walls of the room and the illusion is shattered by the intrusion of the viewer’s reflection. The most luxurious (hand-painted) and the poorest (newspaper) forms of wallpaper are juxtaposed much as the escapist fantasy of art’s reach for the sublime is disrupted by the increasingly dire news of our time.

In Private Collections, a new series of painted diptychs, the artist has inserted fictional collections of paintings representing various personal obsessions into mirror images of the artist’s homes. By contrast, in Public Collection, the viewer’s image intrudes into a photograph of a found collection of paintings for sale on the street in Poland.

For the recent Whitney Biennial, Harvey created the Museum of Failure which consisted of The Collection of Impossible Subjects, a back-lit, mirrored Plexiglas wall hand-engraved with a salon hanging of empty ornate frames and, visible beyond it, Invisible Self-Portrait in My Studio, a painting of the identical collection of frames containing views based on a photograph taken in a collection of mirrors of the artist painting the piece in her studio. In the first instance, context (the frames, the mirrored viewer) utterly trumps subject matter. In the second, the elaborate context (based on the Uffizi Gallery in Florence) and the invisibility of the artist (who is obscured by the camera’s flash) serve to highlight the collapse of art into narcissistic self-reflection. The piece was hailed as "visually stunning" and "one of the wonders" of the Biennial.

Harvey\'s work is in museum collections in the US and Europe. A New Yorker, Harvey has had one-person exhibits in museums and galleries and completed noted public art commissions with Creative Time, Chicago Transit Authority and MTA Arts for Transit. She is currently working on a mosaic for the new Metro-North Yankee Stadium Station. Her book The New York Beautification Project was published by Gregory Miller and Co. in 2005. A catalog of her work, Ellen Harvey: Mirror, was published by Pennsylvania Academy in conjunction with her exhibition there in 2006. This is her first gallery exhibition in Philadelphia. 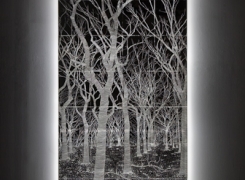 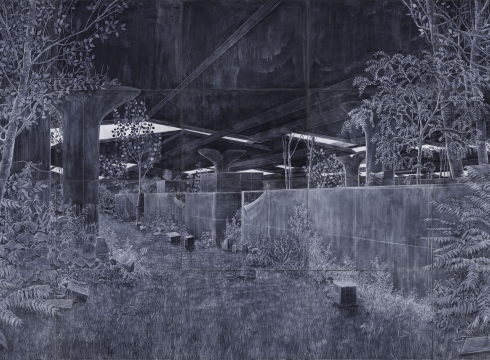