September 2007, Philadelphia, PA - Locks Gallery is pleased to present an exhibition of important early works by sculptor Bryan Hunt. This will be the first time in close to twenty years that the works in the exhibition, created between 1974 and 1979, will be shown together. Monuments and Wonders 1974-79, will be accompanied by a scholarly catalogue with an essay written by Constance Lewallen, bringing together virtually all of Hunt’s significant early works, including those from several museum collections. This will be Hunt’s fifth exhibition with the Locks Gallery.

Hunt, who was born in 1947 in Terre Haute, IN, wanted to be an architect when he was growing up. When he was in his teens he was a technical assistant at Kennedy Space Center and later worked as a draftsman for a mechanical engineer. These interests and training are very apparent in these early works, with their fascination with the history and construction of buildings, monuments, and flying machines. In 1968, Hunt moved to Los Angeles and studied at the Otis Art Institute. He continued to live and work in LA until 1976, part of a dynamic scene that included Allan McCollum, Lynda Benglis, Bruce Naumann, and Chris Burden.

During these years in LA, Hunt produced an extraordinary body of work. Curator Sue Scott has called 1974 the pivotal year of Hunt’s career. “In only twelve months, he created five important sculptures that moved his work in a new direction, laying a firm foundation for years of intense creativity. These five works – Empire State with Hindenburg, Nankow Pass (Wall of China), Hoover Dam, Tower of Babel, and the first of a series of airships – with their curious amalgamation of art, science, technology and philosophy were radically different from sculpture then being shown in galleries and museums.” These works were a challenge to the cult-like followers of Minimalism and Earth Art and a sophisticated and idiosyncratic response to classical and modern sculpture.

Following these earliest works came a series of sculptures depicting the volumes of lakes and quarries and then the first of his signature waterfall sculptures. Christoph Brockhaus noted that Hunt “has been interested in Rodin’s surface structure, Brancusi’s dialogue between sculpture and pedestal, the geometric shapes of Constructivism, and Abstract Expressionisms gesture.”

His first solo exhibition in Los Angeles was at the Jack Glenn Gallery in 1974, but he was soon showing internationally including solo exhibitions at The Institute for Art and Urban Resources, The Clocktower, New York (1974). These early works were also included in critical group exhibitions of the time, including “Young American Artists” at The Solomon R. Guggenheim Museum (1978), “made by sculptors” at the Stedelijk Museum, Amsterdam (1978), “Decade in Review” at the Whitney Museum of American Art (1979), and “Visionary Images” Renaissance Society at the University of Chicago (1979). Many of these early works are in museum collections, including the Museum of Modern Art, New York; the Whitney Museum of American Art, New York; the Hirshhorn Museum and Sculpture Garden, Washington; the Los Angeles County Museum of Art; and the Museum of Contemporary Art, Los Angeles. 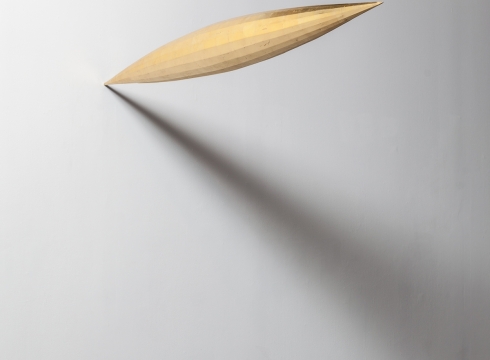