January 2008, Philadelphia, PA – Locks Gallery is pleased to present an exhibition of new photography and sculpture by Alyson Shotz. The exhibition will be on view January 18 through February 29, 2008. There will be a reception for the artist on Friday, February 1, 2008, from 5:30 to 7:30pm.

In these digital photographs and sculpture, Alyson Shotz continues to explore space and the structure of nature. The series of digital photographs entitled A Momentary Configuration of Matter are the latest and largest in a series Shotz has been working on for almost a decade. The images are constructed in the computer from photographs of her sculptures collaged with carefully selected images from nature (e.g. dew removed from its resting place on a spider web). These images combine to create new complex forms that could exist on the head of a pin or out in space, functioning as snapshots at moments of creation. Shotz's Small Universe sculptures of glass beads and lenses take these concepts into three dimensions, making reference to both solar systems and atomic structures as they slowly rotate around their central axis.

Crystalline Structure is a shimmering, delicate piece, made of glass beads and piano wire. It could be a molecular structure seen through a microscope made very large, but is also reminiscent of drops of water comprising a cloud, or even falling snow.

Shotz's 40-foot long, wave-like screen of cut lens sheets and staples titled The Shape of Space was exhibited in 2007 at the Guggenheim in an exhibition of the same name, and acquired by the museum for the permanent collection. Her work can also be seen in Currents: Recent Acquisitions at the Hirshhorn Museum through March of 2008. Shotz will also be part of a three person show opening in the spring at the San Francisco Museum of Art. Her work can be found in the collections of museums such as the Los Angeles County Museum of Art, Hirshhorn Museum, Brooklyn Museum of Art, The High Museum of Art, and Harvard University. 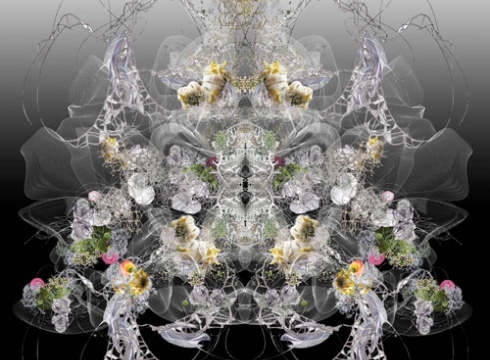