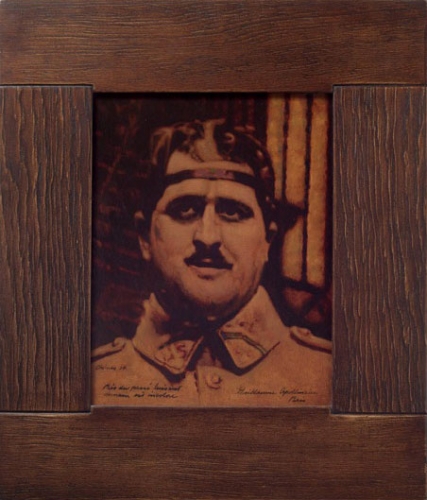 The 1974 painting Guillaume Apollinaire by Thomas Chimes (1921–2008) is included in the exhibition The Surrealists: Works from the Collection at the Philadelphia Museum of Art. This portrait of Apollinaire is one of forty-eight panel portraits Chimes completed between 1973 and 1978. These distinct sepia-palette paintings, each with a handcrafted frame made by the artist, included 19th and early 20th painters and writers, such as Edgar Allen Poe, Oscar Wilde, James Joyce and Antonin Artaud.

An important historical touchstone for the exhibition, Apollinaire famously coined the word "surréalisme" in the summer of 1917 in the program notes for his ballet Parade. Apollinaire was a creative peer and friend to Alfred Jarry, whose contributions were a lifelong influence on Thomas Chimes. The inclusion of the portrait by Chimes highlights a distinctly contemporary and local legacy within a survey of the historic and geographic conditions of surrealism.

The Surrealists will be on view at the Philadelphia Museum of Art through March 2, 2014.