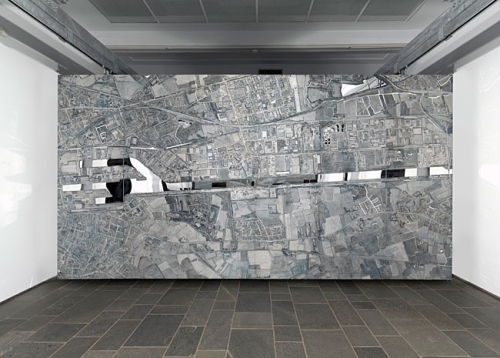 Ellen Harvey will debut The Unloved, a new work commissioned by the Groeninge Museum in Bruges, Belgium on October 2, 2014. For her Groeninge project Harvey researched and responded to the specific characteristics of the city and its museum, namely the public archives with its iron mobile hanging racks.

The Unloved juxtaposes Bruges’ fraught connection to the sea with an alternative view of the Museum’s collection to create an installation that immerses viewers in an endlessly mirroring series of conflicting and complementary narratives through painting. Harvey’s installation spans five rooms in which she has replaced the temporary walls that usually conceal the Museum’s art depot with 2.7 meter high by 5.2 meter wide mirrors pierced with salon-style openings, through which the paintings in storage can be viewed. The paintings, which are not generally exhibited, were organized thematically by Harvey in their portrayal of the city and landscape. The installation also includes four large new paintings by Harvey, based on contemporary satellite images of Bruges and its connection to its ocean port of Zeebrugge, which was constructed in 1907 to reconnect Bruges to the ocean in an attempt to revitalize the former port city.

The Unloved is on view through May 2015.