In her latest series of paintings, Sarah McCoubrey captures the eerie magnificence of a generation that stands between two times—rooted in the last breaths of manual traditions carried from the nineteenth century, but charging toward the machine acceleration of the modern era. McCoubrey articulates the valor and brutality of World War I through the lace-maker’s painstaking language of a traditionally feminine craft. After beginning a sabbatical abroad in Belgium in 2014, at the cusp of the centennial of World War I, McCoubrey became enraptured by the the delicate beauty of Belgian lacework and the conflict’s effect on an artistry devastated by the wartime rationing of linen. McCoubrey’s fine calligraphic strokes revive the ancestral folk medium to weave a narrative which invokes feminine creativity—forging elegant lace lines in gouache to depict stoic wooden ships, hooded gas masks adorning the solemn figures of soldiers, and intricate domestic motifs grounded on repurposed butter papers: the relics of rationing. Centennial pays reverence to a period, perhaps not so far gone, when time might have moved differently between letters from the front, the delicate handicraft of items made in the home, and the slow glide of ships across the sea. 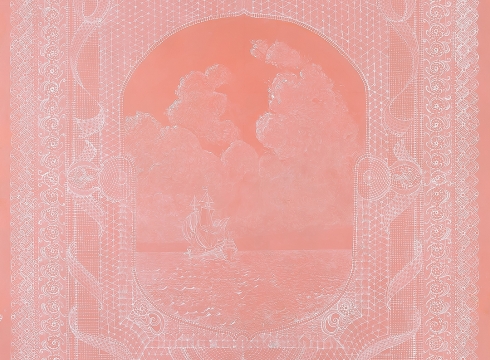