September 14, 2005, Philadelphia, PA—Nancy Graves: The Shining, Elusive Element will be on view at Locks Gallery from October 14 through November 12, 2005. Admission is free and open to the public.

Quirky cast assemblages in bronze and steel and paintings by Nancy Graves (1939–1995) attest to the artist's daring innovations in color and form in the 1980s. The interplay between natural and man-made objects replicated in her sculpture is emphasized through brilliant and complex color palettes of polyurethane paint, fired enamel, and patination. These improbable yet evocative assemblages are whimsical poetries of form that both celebrate and mock their physicality.

Transposing concepts from one medium to another, Graves' s paintings create sculptural space through layering of images and technique—heightened by the addition of a three-dimensional structure to the canvas. Her powerful and often humorous works challenge both intuition and illusion as boundaries between media are disbanded.

Graves earned an MFA from Yale in 1964. Like her classmates Chuck Close, Brice Marden, and Richard Serra, Graves became known for her experimental approach to art practice in the '60s and '70s. This is the third solo exhibition of Nancy Graves organized by Locks Gallery (previously in 1991 and 1996). The show consists of 15 works dating from 1984–1990.

The artist's work is in over 40 museum collections around the world and several retrospectives have taken place in the last twenty years. The artist was included in recent large-scale surveys at the turn of the millennium including The American Century at the Whitney Museum of American Art (1999–2000) and Century City at the Tate Modern in London (2001).

The exhibition is accompanied by a fully-illustrated catalog with an essay by art historian and critic Judith Stein—the essay is titled "The Shining, Elusive Element." 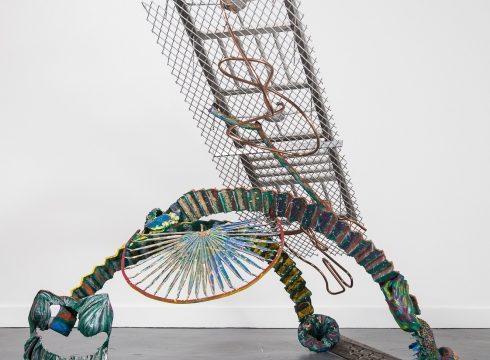