April 7, 2006, Philadelphia, PA - Locks Gallery is pleased to present an exhibition of paintings and works on paper by esteemed Philadelphia artist Edna Andrade. Focusing on works from the 1980s and a period of color-saturated paintings, this is a sequel to both the 2003 retrospective at the Institute of Contemporary Art and Locks Gallery’s last Andrade exhibition in 2004.

This selection of works on paper is a foundation for the large-scale paintings of the mid-80s - paintings with southwest-tinged titles like Mariposa, Hot Morning, Sun Belt and Red Disc, several of which will be included in the exhibition. The exhibit’s title, Geometry’s Garden, refers not only to Andrade’s longstanding interests in mathematics and precision drawing, but also to how her work shifted in the 1980s to become expansive reveries on mosaic-like, architectural schematics, or alternatively, the sky and infinite space.

The artist has described geometry as the basis of all her work and she continually builds on that structure with expressive color. The paintings from the 1980s exhibit a pronounced shift in color - brighter hues predominate - following teaching stints in Arizona and New Mexico and a transformative trip to India in 1981. Since 1971, Edna Andrade has been represented exclusively by Locks Gallery. Her work has been featured in over twenty one-person exhibitions and is included in museum collections across the country including the Addison Gallery of American Art, the Dallas Museum of Art, the Houston Museum of Fine Arts, the Pennsylvania Academy of the Fine Arts, the Philadelphia Museum of Art, the Virginia Museum of Fine Arts and Yale University Art Gallery. 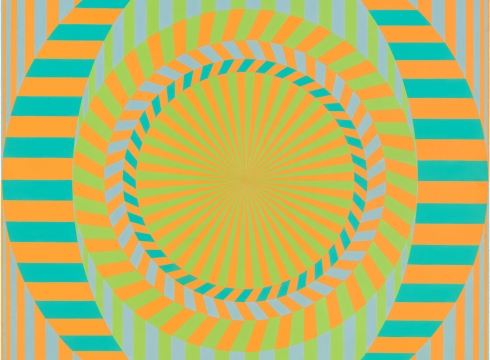